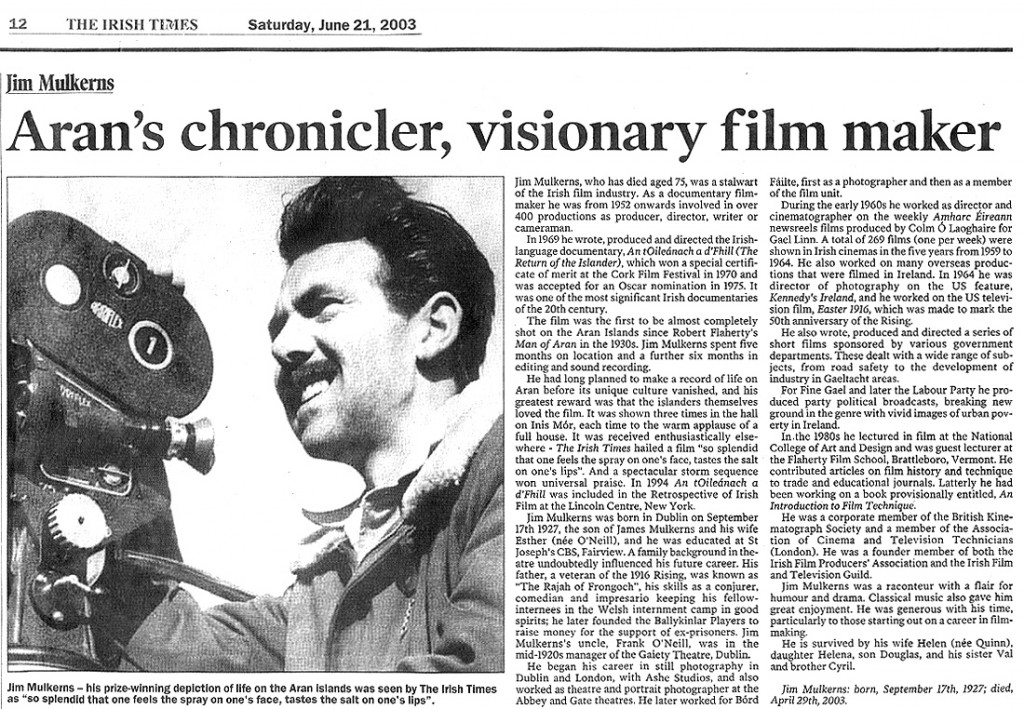 Text of this obituary:

“His prize-winning depiction of life on the Aran Islands was seen by The Irish Times as, ‘so splendid that one feels the spray on one’s face, tastes the salt on one’s lips’.”

Jim Mulkerns, who has died aged 75, was a stalwart of the Irish film industry. As a documentary film maker he was from 1952 onwards involved in over 400 productions as producer, director, writer or cameraman.

In 1969 he wrote, produced and directed the Irish-language documentary,  An tOileánach a d’Fhill  (The Return of the Islander), which won a special certificate of merit at the Cork Film Festival in 1970 and was accepted for an Oscar nomination in 1975. It was one of the most significant Irish documentaries of the 20th century.

The film was the first to be almost completely shot on the Aran Islands since Robert Flaherty’s Man of Aran in the 1930s. Jim Mulkerns spent five months on location and a further six months in editing and sound recording.

He had long planned to make a record of life on Aran before its unique culture vanished, and his greatest reward was that the islanders themselves loved the film. It was shown three times in the hall on Inis M6r, each time to the warm applause of a full house. It was received enthusiastically elsewhere – The Irish Times hailed a film “so splendid that one feels the spray on one’s face, tastes the salt on one’s lips”. And a spectacular storm sequence won universal praise. In 1994 An tOileánach a d’Fhill was included in the Retrospective of Irish Film at the Lincoln Centre, New York.

Jim Mulkerns was born in Dublin on September 17th 1927, the son of James Mulkerns and his wife Esther (пёе O’Neill), and he was educated at St Joseph’s CBS, Fairview. A family background in theatre undoubtedly influenced his future career. His father, a veteran of the 1916 Rising, was known as “The Rajah of Frongoch”, his skills as a conjurer, comedian and impresario keeping his fellow-internees in the Welsh internment camp in good spirits. He later founded the Ballykinlar Players to raise money for the support of ex-prisoners. Jim Mulkerns’s uncle. Frank O’Neill, was, in the mid-1920s, manager of the Gaiety Theatre, Dublin.

He began his career in still photography in Dublin and London, with Ashe Studios, and also worked as theatre and portrait photographer at the Abbey and Gate theatres. He later worked for Bórd
Fáillte, first as a photographer and then as a member of the film unit.

During the early 1960s he worked as director and cinematographer on the weekly Amharc Eireann newsreels films produced by Colm Ó Laoghaire for Gael Linn. A total of 269 films (one per week) were shown in Irish cinemas in the five years from 1959 to 1964. He also worked on many overseas productions that were filmed in Ireland. In 1964 he was director of photography on the US feature, Kennedy’s Ireland, and he worked on the US television film, Easter 1916, which was made to mark the 50th anniversary of the Rising.

He also wrote, produced and directed a scries of short films sponsored by various government departments. These dealt with a wide range of subjects, from road safety to the development of industry in Gaeltacht areas.

For Fine Gael and later the Labour Party he produced party political broadcasts, breaking new ground in the genre with vivid images of urban poverty in Ireland.

In the 1980s he lectured in film at the National College of Art and Design and was guest lecturer at the Flaherty Film School, Brattlcboro, Vermont. He contributed articles on film history and technique to trade and educational journals. Latterly he had been working on a book provisionally entitled An Introduction to Film Technique.

Jim Mulkerns was a raconteur with a flair for humour and drama. Classical music also gave him great enjoyment. He was generous with his time, particularly to those starting out on a career in film-making.
He is survived by his wife Helen (nee Quinn), daughter Helena, son Douglas, and his sister Val and brother Cyril.