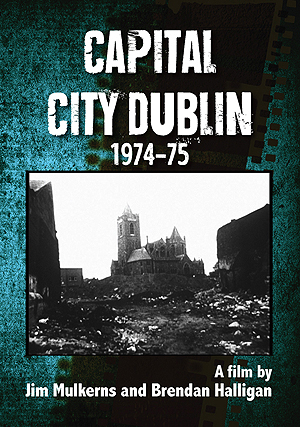 A new version of Capital City Dublin 1974-75, a film by Brendan Halligan and Jim Mulkerns, will be launched on 5 November next, and screened weekly as part of the Irish Film Institute’s “Focus on Jim Mulkerns” Archive at Lunchtime showings this November, 2016.

The previously unreleased short film was made just over forty years ago, when Dublin looked more like a post-war European city in 1946 than a nineteen-seventies European capital.  As Secretary of the Irish Labour Party in 1969, Brendan Halligan had originally commissioned independent film maker Jim Mulkerns to film the city as part of footage to be used for party political broadcasts. After filming more material for another party political broadcast in 1973, following which Labour came into power in the National Coalition Government, they worked together to produce a documentary, to show various public authorities with the idea of letting the images speak for themselves and prompt action.

For many years the film existed in silent celluloid only, under the preservation care of the IFI Irish Film Archive. Then, on the film’s fortieth Anniversary,  Sunniva O’Flynn and Raelene Casey of the IFI Irish Film Archive facilitated conversion of a digital copy of Capital City Dublin 1974-75 for Scáthán, Halligan’s own publications and media imprint.  Design and technical production on a new DVD edition was undertaken by Jim Mulkerns’s daughter Helena, whose company Cyberscribe created the 2016 titles and look.

Next came a new original soundtrack from musician Josh Johnston, who had previously worked with the IFI Irish Film Archive as a live accompanist for screenings of his Grandfather Denis’s film, Guests of the Nation. His score lends a haunting new aspect to the film.

The film with its new score will be screened alongside two other short films by Jim Mulkerns – An tOileánach a d’Fhill (1970) and Ireland Invites You (1966), on Saturday, 05 November 2016, at 12.45 pm at The Irish Film Institute in Dublin. Brendan Halligan will introduce the film.

For the full programme
of “Focus On Jim Mulkerns”
see: www.ifi.ie
or www.BrendanHalligan.com